Bengt Lindström (1925-2008) spent two years studying at the Stockholm Academy (1944-45), then spent time in Copenhagen and Chicago before settling in Paris, where he was a frequent visitor to Léger and Lhote’s studios. His early works were close to Tachism, but figures came to take up more and more space in his highly colourful world. His first solo exhibition was held in Stockholm in 1954. He was friends with Bogart, Marfaing, Maryan, and Pouget, and later Asger Jorn, who influenced his work to a certain extent.

His style became more confident in the late 1950s – a somewhat allusive form of representation juxtaposing bold shades of blue, red, green, yellow, black, and white in thick layers. The lines were deliberately simplified to heighten the subject’s expressive potential. The faces or bodies were often framed very tightly to strike the viewer first as landscapes before revealing their human or even quasi-divine nature.
The Breteau Gallery held a solo exhibition of his works in 1958. In 1962, he took part in the second Nouvelle Figuration exhibition at the Mathieu Fels Gallery, and in 1964 his works were shown with those of the Nord-Sud group.

Bengt Lindström painted portraits of famous writers such as Oscar Wilde (1966) and André Gide (1968). He was also inspired by Nordic mythology, painting masks, gods, monsters, and Valkyries. In the 1980s, he began sculpting small papier mâché heads while continuing to paint.
Lindström’s works are striking for their unique energy, perhaps influenced by his interest in Shamanism and his close links to the people of Lapland. 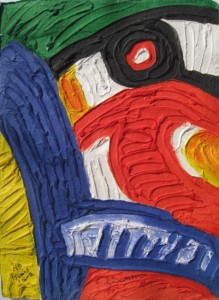 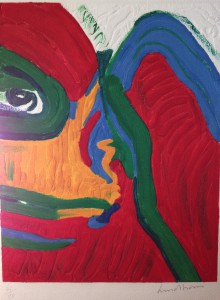