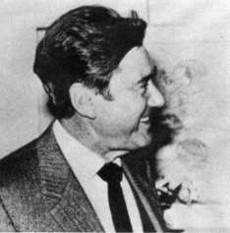 Roberto Matta was born in Santiago, Chile in 1911 and was originally trained as an architect. His love for the medium did not last long, however, and by 1933 Matta had left for Paris to join its burgeoning surrealist movement. Travelling between the USA and Europe, he soon became acquainted with the great artistic minds of his day: Magritte; Dali; Le Corbusier; Breton, to name but a few. It was in fact Breton who first introduced the young Matta to the Paris Surrealist Movement and encouraged his work, spurring him on to produce pieces for Minotaure and other Surrealist journals.

For the next 5 years Matta continued to work across Europe before emigrating to the USA in 1938. His leaving coincided with a major development in his artistic style: where before Matta’s work had been predominantly drawings, using the draughtsmanship he had developed as an architect, he now moved on to oil paintings. Matta stayed in the US for the next ten years, and the turbulence of the Second World War and the political anxiety of the 1940s-50s which followed its aftermath are to be found reflected in the disturbed and mechanical images of the paintings produced within that period.

Throughout the 1960s and ‘70s Matta involved himself with various social movements, firmly believing in the political power of his art, and he became a supporter of the socialist Chilean president Salvador Allende, in whose honour he produced a large mural entitled The First Goal of the Chilean People. Upon Allende’s replacement by the militaristic usurper Pinochet in 1973, the mural was painted over by soldiers: the task supposedly took 16 coats of paint before the image could no longer be seen, but the mural was recently rediscovered in 2005 and has since been restored  and displayed in the La Granja city hall in Matta’s hometown of Santiago. Matta died in Italy, 2002.