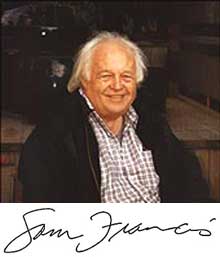 Born in 1923 in San Mateo, California, Francis attended the University of California in Berkeley from 1941 to 1943, when he joined the Air Force. In 1945, hospitalized in San Francisco after an injury, he began painting under the influence of David Park. He had already developed an abstract style before returning  to Berkeley for formal art studies in 1949 and 1950. In school, Francis developed the propensity for vivid blots of color and thinned pigments that is reflected in his mature work. In the 1950s, Francis traveled extensively,  with Paris as his base. He has lived abroad so much that he is considered as much an international painter as an American one. In France, Francis produced some pale monochromatic  works. His characteristic brilliant colors soon returned in overlapping and dripping profusion in the dense, unified style  typical of his work up to the mid-1950s. His paintings in the 1956 “Twelve Americans” exhibit at the Museum of Modern  Art in New York City gained him a worldwide reputation.

Japanese influence is seen in Francis’s uniqu early 1960s experimentation with empty-center painting. Vast canvases with unpainted central areas are defined, accented,  or dominated by strokes and drips in bold colors around the  extremities of the canvas.  From the 1970s on, Francis returned to centered painting, in  which color puddles out in a galaxy effect on monumental canvases.  During the final three decades of his career his style of large scale bright Abstract expressionism was also closely associated with Color field painting.  During the last year of his life, suffering from prostate cancer and  unable to paint with his right hand after a fall, in a final burst of  energy he used his left hand to complete a dazzling series of about 150  small paintings before he died. He was buried in Olema, in Marin County, California.   As of 2008, the Foundation is working to create a Catalogue Raisonné of Francis’s work. In addition to collecting information on known Francis works, they also have a page dedicated to “missing works” for which they are seeking any information interested parties may have. 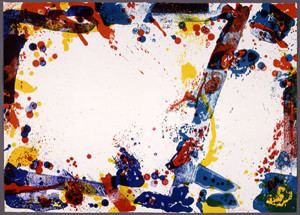