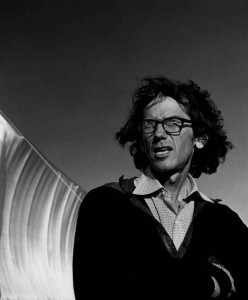 Born in 1935 as Christo Vladimirov Javacheff, Bulgarian-American artist Christo studied in Sofia, Vienna, and Paris. Christo’s early experiments in assemblage led to his trademark device of wrapping familiar objects in cloth and other materials, giving them an artificial skin that simultaneously conceals, reveals, and transforms them. Since 1958 he has worked with his late wife and artistic partner, Jeanne-Claude (de Guillebon), born in Casablanca, and studied Univ. of Tunis. The two artists met in Paris and moved to New York City in 1964.

A leading figure in conceptual art, Christo, in collaboration with Jeanne-Claude, has specialized in large-scale temporary outdoor installations. Running Fence (1976), a shimmering fabric curtain, was strung more than 24 miles across the rolling California landscape. Other projects have included surrounding 11 islands in Florida’s Biscayne Bay with floating hot-pink fabric (1983), wrapping the Pont Neuf in Paris (1985), concurrent installations of thousands of 20-ft (6-m) tall umbrellas—blue near Tokyo and yellow near Los Angeles (1991), and wrapping Berlin’s Reichstag in silvery fabric (1995). On the paths and natural contours of New York City’s Central Park the two created (2005) The Gates, a meandering installation of 7,500 saffron-hued rectangular vinyl gates. Each was 16-ft (5-m) tall and hung, to about halfway down, with a pleated nylon panel colored to match, which blew with the wind and shifted color with the changing light.

In his printed art, often including collage, Christo wraps an object, challenging the viewer to accurately remember the concealed object and giving it the notion of rarity because it is inaccessible. These have been included in museum exhibitions in the United States, Australia, Germany, Holland, Israel, and Denmark and are in the permanent collections of the Museum of Modern Art and the Whitney Museum of American Art in New York, the Tate Gallery in London, the Stedelijk Museum in Amsterdam, and the Albright-Knox Art Gallery in Buffalo