Jan Schoonhoven (1914-1994) was one of the most important Dutch artists of the twentieth century. He played a central role in the development of reductionist and concept-oriented art. He is renowned for his cardboard and papier-mâché reliefs, always in white, which Schoonhoven considered “free from any principle of painting” and “neither a beautiful material nor a symbol of something else: a white plain is a white plain.”

Although the artist enjoyed a successful career, he worked at the Dutch Postal Services until his retirement in 1976. The routine and order of his working life are reflected in the repetition, order and patterns of Schoonhoven’s work.

The artist was initially linked to the CoBrA and informal art movements, but was later part of the Nul-groep, whose aim was to create objective art. Schoonhoven’s work attempts to convey the beauty of the modern world, with no further analysis. In his œuvre, all sign of the artist is effaced and the artwork is non-referential and non-hierarchical. 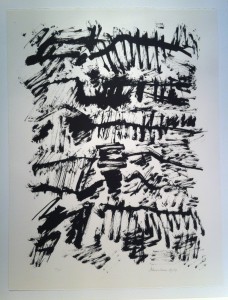